Stink bugs seek warm host venues to survive the cold weather. So you can expect an uptick in stink bugs when winter approaches. These smelly horrors are prevalent in the eastern parts of the US and the states of Arizona, California, Washington, New Mexico, Oregon, and Texas.

Stinks bugs aren’t harmful at all. They give out their foul odor only when threatened or crushed, and that too doesn’t last long. So why worry? Well, it’s because when Halloween comes, carved up Pumpkins or Jack-O’-Lanterns are left outdoors. They are appealing not just for trick or treaters, but also to the pests.

You can get rid of isolated stink bugs in a matter of minutes. An infestation, however, will be quite tricky to eliminate. This is because stink bugs are known to be swift fliers. When threatened, stink bugs secrete a very foul odor – similar to a skunk. Chasing about Stink Bugs in your home will not only annoy you, but your home will also smell bad too! Other than stinking up your home, stink bugs are notorious for damaging vegetation. This is more specific to all the fruits and vegetables you store in the open areas of your home.

Stink bugs have limited natural predators. Thus, commercial pest management is vital for stink bug control. If you see a high frequency of stink bugs entering your home, its time you took these precautionary measures, which can be grouped into outside and indoor measures. 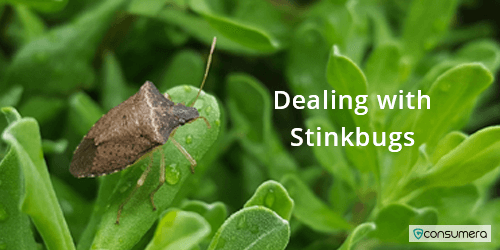 Get screens for all your windows/doors and chimneys. The cold weather will cause all kinds of pests to find creative ways of entering your home. Your chimney is only one of the places where stink bugs and other pests will play Santa.You should rub all your inlet sheets with pungent dryer sheets. Stink bugs cannot stand the odor of dryer sheets, thereby making them a very effective stink repellent

Another step to kill stink bugs in one fell swoop is to hang a wet towel outside your home. Over the night, most of them would populate the towel. Once that’s done, drop the bug-infested towel into a bucket of soapy water, which will instantly kill all the stink bugs.

Always check your groceries and vegetables while and after purchasing them. Stink bugs thrive on fresh produce. Therefore, you should wash the vegetables under tap water before using them to weed out stink bugs, if any. This will also help you get rid of the foul-smelling residue remaining on your purchased product.

First things first, do not attempt to squish them. If they feel threatened, they may fly away and emit their foul odor. If you manage to kill them, you’ll have to deal with the full brunt of the stench.

If there are only a handful of stink bugs in your home, you can use an old disposable water bottle. You can use the cap to coax the stink bug into the bottle and then seal it. You can then put the bugs back into the wilderness.

By opting to throw out all the stink bugs from your home instead of killing them, you manage the risk of your house stinking up. Throwing stink bugs outside will have them die of cold temperatures in the coming winter. If you find the process of extracting stink bugs strenuous or there are just way too many pests invading your home, call in a pest control agency. However, make sure to prepare your apartment or bungalow before services begin.

As suggested above, if you want to get rid of your stink bug troubles for good, you will need to call in a pest control agency. You may have questions like, is it worth the money? Can you trust the pest control Agency? What if your pest woes persist even after calling them?

The answers to all those questions can be found on consumera. Here, you have a list of all the top pest control agencies in the United States. Every pest control agency list comes with ratings and reviews from actual users, giving you maximum clarity.

Welcome to the Consumera Club!

You will receive the latest updates fresh from the mill