Home / automobile maintenance / How Does A Car’s Cooling System Work?

How Does A Car’s Cooling System Work?

The modern cooling system of a car manages to keep the temperature regulated. But how does a car’s cooling system work? How can it maintain both warm and cool temperatures? What are the parts that make this possible? Read on to know more. 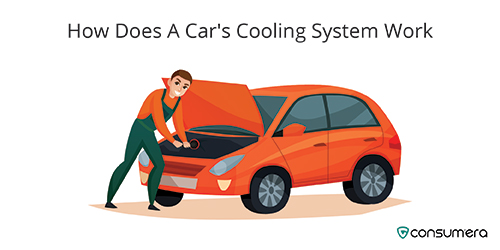 How Does A Car Engine Cooling System Work?

A car’s cooling system is a crucial component of the internal combustion engine. It maintains your car’s operating temperature by preventing overheating and regulating warm temperatures to the passenger compartment when required.

The heat inside a car engine’s combustion chamber can reach a temperature as high as 1600 degrees Fahrenheit. The ideal operating temperature of a car’s engine is around the 200 degrees range. The temperature generally depends on the coolant’s temperature. It is very easy for an engine to get damaged when the temperature reaches anywhere near 300 degrees.

The cooling system of an engine depends on the principle of heat transfer. This principle works on the movement of heat energy from one area to another. Heat energy seeks out colder areas to flow towards. For example, placing warm cans in an ice cooler can make the cans colder.

In a car’s cooling system, the water pump spreads coolant throughout the cooling system of the car. It uses spinning impellers to spread the coolant through the radiator, heater core, and the engine. This water pump is powered by accessory drive belts that operate the air conditioner compressor, alternator, and power steering pump. The belts are driven by a pulley placed on the front of the crankshaft.

The coolant flows through the engine with the help of water jackets. Water jackets are placed throughout the car’s engine but are mainly concentrated around the combustion chambers, as this is where the highest temperature is generated.

Once it is at operating temperature, the thermostat opens, permitting the coolant liquid to flow through the radiator. The thermostat uses a bimetal spring for this action. The spring has two different metals that expand and contract differently when exposed to change in the temperature. When the hot coolant heats the spring, both metals pull against each other, making the spring contract. This action opens the poppet valve and allows the coolant to flow.

Belt-driven fans generally function with a centrifugal clutch or a thermostatic clutch. The centrifugal clutch slows down the fan blades’ spinning as the engine speed increases. It allows the fan to freewheel, disconnected from the engine’s torque. It is based on the assumption that the vehicle must be moving down the road if the engine speed is high. When a vehicle is moving, air blows through the radiator, which requires lesser fan speed. Cutting down on the fan speed reduces the load on the engine, which improves fuel economy.

The thermostatic clutch has a built-in bi-metal spring that lessens torque to the fan blades when the engine is cold. As the spring heats up, it allows for the full operation of the fan blades. This reduces the fan speed as well, improving the fuel economy.

A pressure cap can be placed on either the radiator or a plastic degas bottle (a reservoir). A degas bottle is placed in the engine compartment above the engine and radiator. Air rises when trapped in liquid; any air in the cooling system makes its way up to the degas bottle and is pushed out of the pressure cap. Air can be adverse to the car seat cooling system. Trapped air can inhibit the coolant’s flow and cause overheating false temperature readings, and lack of heat in the passenger compartment.

Apart from keeping a car’s engine cool, a car engine’s cooling system can also keep you warm. The hot coolant is transferred to the heater core, and then to the air. This comes into the car with the help of a blower motor.

The heater core is a set of narrow tubes connected by thin layers of metal arranged in a honey-comb-like structure. The hot tubes heat the honey-comb, which transmits the heat energy to the air. This air is forced into the heater core by a blower motor.

A car engine’s cooling system can keep the engine from self-destruction. The cooling system continuously keeps the temperature regulated according to what you want. Suffice it to say, the breakdown or failure of this system can be quite troublesome to deal with. Equipping yourself with an auto warranty can help you in such situations. Visit Consumera to know about the top auto warranty companies.

Welcome to the Consumera Club!

You will receive the latest updates fresh from the mill